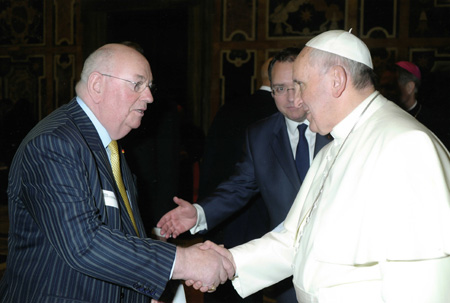 The John Kennedy Charitable Foundation has awarded £1,670,378 to date to a diverse range of causes reflecting John’s own passionately held principles. Alongside his dedication to Northern Ireland’s process of reconciliation, these have included educational projects, medical charities, and initiatives to improve the lives of disadvantaged children.

His UK charities include Headway, which aims to help rebuild the lives of more than 1,000,000 people nationwide with brain injuries, and Autism Together. John is Patron and Director of this charity which offers specialist support services to people with autism and their families.

Much of John’s overseas charitable commitment supports the work of Catholic agencies in some of the poorest and most war-torn corners of the globe. The provision of housing aid in Bosnia, initiatives to safeguard street children in Sao Paolo, Brazil, and the support of orphanages in Romania are some of these life-changing projects. For over thirty years John has aided initiatives in the Philippines, including maintenance of a drugs and rehabilitation programme on the island of Mindanao.

In 2013 John Kennedy CBE had the privilege of meeting Pope Francis in Rome and informing him about the work of Father Patrick Devine, founder of The Shalom Centre in Nairobi, Kenya which John supports and which is attempting to bring peace among the tribal groups in Africa. John travelled to Washington DC in November 2013 as Fr. Devine received a major Humanitarian Award, previously won by Nelson Mandela.

He has also supported the work of The Columbian Fathers across the globe.