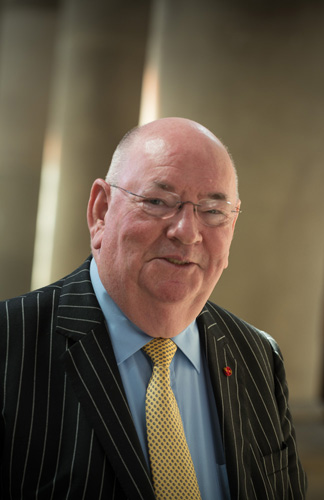 John Kennedy’s philosophy is simple: those who have enjoyed prosperity have a duty to share the rewards it brings. His generosity, though, extends beyond his considerable financial investment. Over the years he has put his hard-won experience to good use in raising awareness of important causes and issues. He has always been willing to share best practice and is held in high esteem as a source of information and expertise.

His philanthropy has earned him the respect and friendship of industry leaders, Prime Ministers and Presidents. John has an enviable gift for communicating with people from all walks of life, and has remained true to his roots both in Ireland and the North West. Says John: “I was made in Manchester. I’d like to try to put something back which will make a difference for others.”

This approach to life, he believes, brings benefits for both the sponsor and the recipient. Always keen to encourage the entrepreneurial spirit, John enjoys talking to young people, and is happy to share with them his own life lessons.